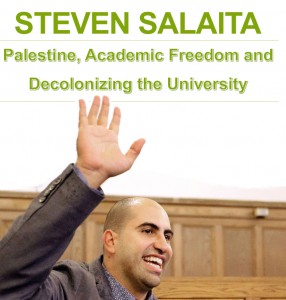 Join us to hear Steven Salaita discuss academic freedom and the struggle to decolonize the university in relation to his own scholarship on indigenous expression.

Time for Action: A Response to Israeli Violations of International Law, issued on the 5th Anniversary of the Palestinian Boycott, Divestment and Sanctions campaign

A Joint Statement of the BDS working group of Faculty for Palestine (F4P, Toronto) and College and University Workers United (CUWU, Montreal)

The Israeli attack on a humanitarian aid convoy to Gaza on May 31, 2010 confirms once again Israel’s pattern of disregard for international law. This pattern was brutally demonstrated during the assault on Gaza in December 2008-January 2009, which killed over 1400 Palestinians. Other flagrant violations of international law by the Israeli state include: the construction of the Wall, the ongoing occupation of the West Bank, Gaza and East Jerusalem, the ever-increasing construction of illegal settlements in these occupied territories and the failure, since 1948, to recognize Palestinian refugees’ right of return. END_OF_DOCUMENT_TOKEN_TO_BE_REPLACED

This submission is written to express our strong support for committed work by Members of Parliament against discrimination in all its forms, and our recognition of real concerns that anti-Semitism might be on the rise. However we are deeply concerned that the focus of the CPCCA is defined in such a way as to undermine serious equity work in Canada, while also posing a major threat to freedom of expression. END_OF_DOCUMENT_TOKEN_TO_BE_REPLACED

The last two years have seen increasing efforts to limit advocacy of Palestinian rights on Canadian universities, amounting to a pattern of the suppression of freedom of speech and freedom of assembly. These include:

END_OF_DOCUMENT_TOKEN_TO_BE_REPLACED

Please enter the Page ID of the Facebook feed you'd like to display. You can do this in either the Custom Facebook Feed plugin settings or in the shortcode itself. For example, [custom-facebook-feed id=YOUR_PAGE_ID_HERE].